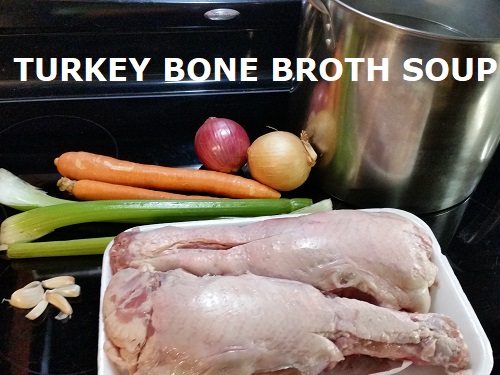 Since eating bone broth soup is something that I do every single day, and usually multiple times per day, it is important to me that I enjoy the flavor. The first generation of bone broth soup recipes that I made were all beef based. I would say that I like the taste of a good beef dish more than, say, chicken or turkey, but when it comes to bone broth the latter is definitely my preferred choice. While I like beef, like steak for example, I find that beef bone broth soup can taste a little too much like a boiled farm animal.


I also went lighter on the celery, onions, garlic, bay leaves and turmeric in the beginning but now I make bone broth the same way I make soup stock - fill er' up! The more flavor you can pack in there the better I say. Just as with the beef bone broth recipe the secret to a good turkey bone broth is to gently boil the turkey bones for at least 24 hours. Eight or 10 hours is not enough for something like bone broth soup. After 24 hours the color of the broth will change from lighter, golden colors to much darker, deeper browns as the minerals leach out from the bones and into the broth.


What kind of meat to use for turkey bone broth soup? - High quality, organic, free range and hormone free turkeys are what you want to find for making turkey bone broth soup. This is one of the super foods that you are counting on to help you feel better so you need to do what you can to get the most out of it. That means finding high quality food to work with.


How To Make Turkey Bone Broth

Even when you boil the bones for five minutes and then strain them off and rinse everything you will find that more scum and foam develops once you get everything boiling again. You can leave the foam and scum and it will eventually die down but it will make the broth more cloudy. If you continue to skim foam for the first half an hour or so then this will take care of the majority that will form and you will be left with a colored but clear broth for your efforts.


The vinegar that you add to the broth serves to help pull minerals from the bones that you are boiling. This is one of the reasons that I prefer to use turkey backs over any other cut for making bone broth soup because there are so many bones. Also it tastes amazing. Way better than beef bone broth in my opinion and it is very inexpensive. Eating strict organic, free range, grass fed, AIP is super expensive - let's call it what it is. Turkey backs are not exactly a prime cut and I can usually get two giant ones like pictured above for about five dollars.

Step 8 - Allow to cool. Strain broth and remove fat layer and keep for future use if using high quality and organic meats


If using a high quality meat, which you should be, you can skim, process and keep the fat that comes off the turkeys. Instead of trying to skim the soup while it is warm it is much easier to cool the bone broth off and then easily remove the solidified fat layer that forms on top. When it comes to making giant pots of broth like I make you need to take steps to cool it off quickly. A five gallon vat of soup would stay warm for many, many hours...far too long to be food safe.


When I am done with my bone broth I remove as many bones and vegetables as possible, and then I strain the broth through a fine strainer and into another huge pot. From here I will sit this pot into a sink full of cold water. Within about ten minutes or so the water in the sink will now be quite warm as it has pulled so much heat from the broth through the sides of the pot. Drain and refill with cold water a second time. Usually this second cold water bath will be enough to bring the temperature of the whole pot down to ambient room temperature. From here I like to put mine into the refrigerator overnight so that the fat will solidify on the surface which facilitates easy removal. 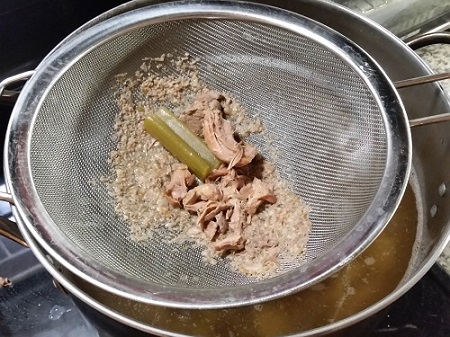 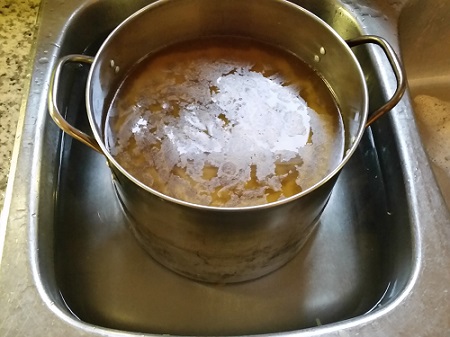 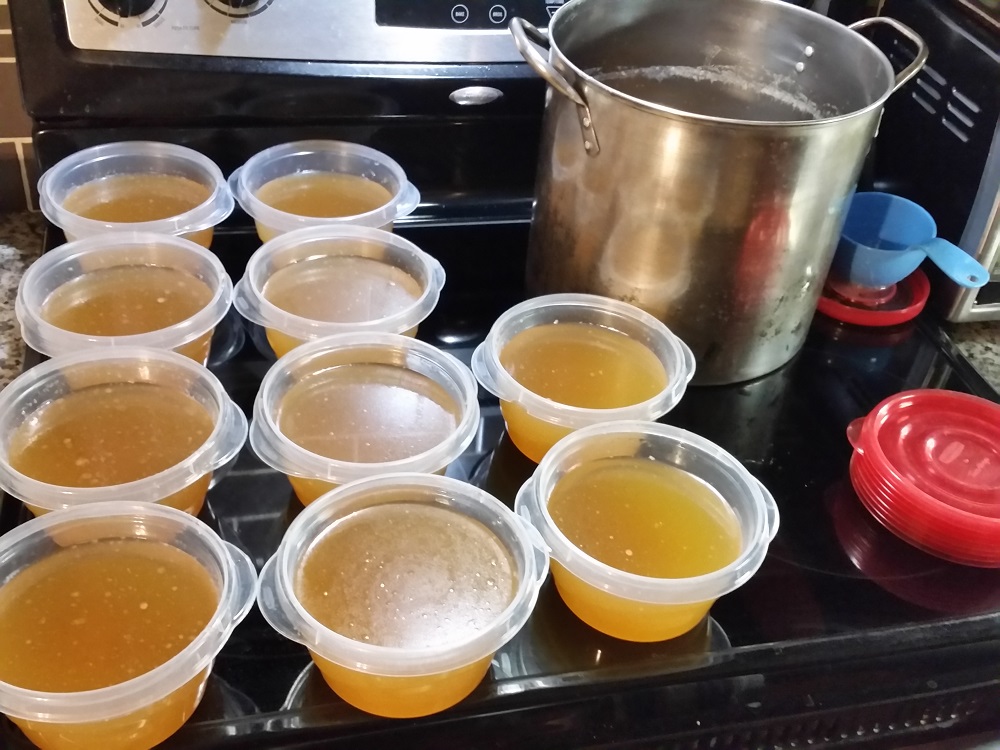 Often when I make a turkey bone broth soup I will package and freeze anywhere from six to a dozen bowls and then keep the remaining bone broth to use as a starter to make a turkey soup. There is so much meat that comes on the turkey backs that if you take the time to harvest it all you can make a really tasty and economical soup. I find that there is enough flavor in the bone broth from the turkey backs that I can add enough water to double the liquid content left in the stock pot. From there I start the process of putting together a soup. Yes, the oven and stovetop certainly get a workout at my house! As soon as one giant vat of boiling broth ends another giant vat of boiling soup begins.