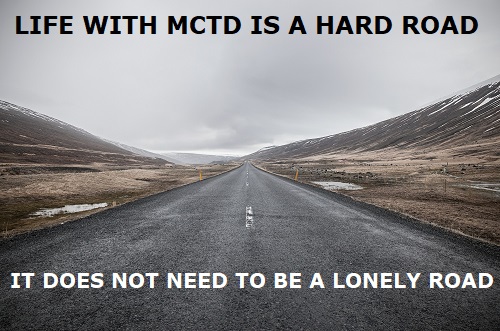 Common causes for MCTD flares
Wheat and gluten, sugar, mental stress, physical stress, lack of sleep, cold, heat, soy, dairy, other grains, alcohol, caffeine, sun exposure, moisture, weather changes, and overexertion are all among the most common flare triggers for MCTD. There are many, many more triggers, and again everyone is different with MCTD, but these are the most commonly talked about ones. When I look at a list like this it is of little surprise to me that I felt so poorly living the lifestyle that I did. I ate gluten in every meal, worked 80+ hours per week almost entirely in the sun, had a very stressful job and hardly slept at night. My being was entirely fueled by caffeine. I wish I could go back and talk with my younger self, but I guess that is the nature of getting older for everyone.


Gluten free is not something everyone should do
I don't know where this story will go. I don't know how much I can fight my disease with food, but what I can tell you definitively, is that a dozen doctors and specialists could not help me to breathe easier, or stop choking, but I stopped eating wheat and I feel like I have enough of my life back that I can wake up and keep fighting tomorrow. Maybe it was a fluke, and I am just lucky that I found this. All of my testing showed that I have no allergy to wheat, and yet when I eat it I get a reliable 24 hour delayed reaction followed by 30 days of throat tightness, lump in my throat, trouble swallowing, and gagging on my enlarged uvula.


Not much relief for people with MCTD
I have found a lot of things that did not work to help me, and very little in the way of things that do help me. Now convinced that diet is, at the very least, directly connected to how poorly I feel, I feel like I have an avenue to explore. An idea to try to improve my situation. I can see clearly how easy it would be to feel hopeless with MCTD. I can't imagine fighting through this alone like so many of us do. The nature of MCTD is that the symptoms seem so dramatic, and seemingly unconnected, that it is just downright hard to believe them. They are my symptoms and even I second guess myself!


Support for people with MCTD
I cannot find the words to express how important it is to support people with MCTD, and help to validate their feelings by endeavoring to learn about MCTD yourself. If you know someone with MCTD then they probably hurt in physical and emotional ways that you can not even begin to fathom. Do not make it worse for them by making them feel isolated, or crazy, or like they complain too much, or are sick all time. Be thankful it is not you, and if it is you, be thankful that you are not the first. There is help. You have options. None of them are easy...but I suspect you are not accustomed to the "easy way" anyway if you have mixed connective tissue disease.


Taking steps to better health with the AIP diet.