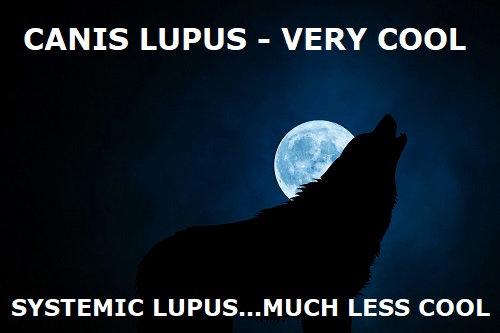 Diagnosis of MCTD
The positive, and confirmed, AntiRNP finding combined with my lifelong battle with pain, joint problems, stiffness, anxiety and a dozen other things all led to the final diagnosis of MCTD. I, like many, had no idea what this was or how serious it is. I had heard of lupus before, and some doctors had mentioned it in the past so it was on my radar, but I thought lupus was just a punchline to a joke. It's not. You definitely do not want to get lupus.


Prescription drugs for MCTD
The first prescription that someone with MCTD will be offered will most likely be Plaquenil (or the generic version of this, hydroxychloroquine). I still, to this day, do not really understand how this drug actually works except to say that it is supposed to slow, or prevent, the progression of this disease. These medications are actually anti-malarials and it is a secondary effect that they can help some people with autoimmune diseases like lupus or MCTD. If these medications do not work, or are inadequate on their own, the next most common medications are those that suppress the immune system, calcium channel blockers, as well as corticosteroids for fighting acute flare ups of the immune system.


Side effects from hydroxychloroquine
The seriousness of my condition was under presented to me, as were my potential options for treatment. Being adverse to taking drugs that I don't need, after a literal lifetime of turning down every opioid that you could possibly shake a stick at, I was disinclined to start taking drugs. Still, I did, in attempts to help the symptoms I was suffering from, most specifically my throat and the constant feeling of choking. I tried a four month cycle of the generic hydroxychloroquine however I found the side effects too strong and discontinued the medication. I definitely think that I felt better in general, and I had less rashes, joint pain, and no bouts of epliscleritis at all, but my throat continued to be my number one problem.


Lifestyle changes
I was very relieved to have a diagnosis of MCTD as this helps to explain so much about the struggles and challenges I have faced in my life. Decades worth of pain that I just could not reconcile that any reasonable person could simply not absorb...and all without any apparent cause, or even physically apparent sign. MCTD represented validation of my pain. However, how do you move forward after diagnosis if you have been diagnosed with an incurable disease, and the most commonly prescribed medication did not solve your biggest problem? I suppose the two answers are to give up, or not give up.


First signs of improvement
The medication for MCTD that I tried certainly improved my state of well being. It is just unfortunate that it did not help my biggest problem to feel better. I intend to return to a hydroxychloroquine prescription long term to help manage the progression of my disease, at a lower dose than before to try to keep side effects low, but in the meantime I was still desperately searching for some relief from this feeling like I am choking all of the time! That is when I tried some advice from family members that actually made my throat symptoms feel better for the first time in over a year!