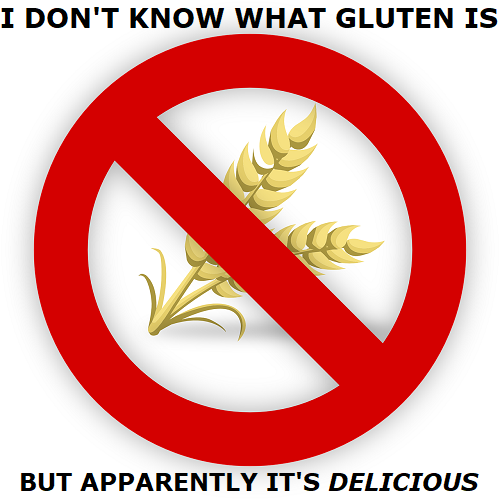 How to avoid eating gluten
First, anyone who says they don't really eat a lot of gluten anyway has no idea what they are talking about. Gluten is in everything. Wheat is in everything. The things that wheat and gluten are not in are largely contaminated with wheat and gluten. If you are not all that sensitive then this would probably never be a problem. For me, as it turns out, it was a big problem. It took a lot of research. More than I can summarize here. Avoiding wheat and gluten mostly would not be enough to help me. I know now that even cross contamination levels can cause me increased symptoms for up to a month.


Treat gluten as seriously as a peanut allergy
If you are serious about not eating any gluten or wheat then you need to eat only products that say gluten free, specifically, because artificial flavors, natural flavors, spices and many other nondescript ingredients all can potentially contain wheat in cross contamination levels high enough to make me sick. If I go to a good restaurant and order expressly gluten free, I still end up getting dosed. It could be because my system is in such bad shape that later, once I have improved through lifestyle changes, I might not be as sensitive. For now, staying away from gluten means eating whole foods, avoiding all processed foods, spending a lot more on my groceries, and eating at home where I can have complete control over any potential for contamination in my food.


More complicated than just a simple allergic response
What is going on here with this gluten? Am I just allergic to it; case closed? Not exactly. It would appear, and again this is speculation since there is no definitive known cause (or cure) for MCTD, that it might be connected to a somewhat controversial medical issue called leaky gut syndrome. In essence, food leaks out of your gut and into your body. It causes inflammation and immune response. It is potentially caused by bacteria, or yeast, or allergies, or toxins or any one of a number of other potential causes. I had terrible heartburn and acid reflux throughout my life. Perhaps this is related. It could be that the GI issues were a cause of my MCTD or it could be that they were merely another (common) symptom of having it. Perhaps I have always been reactive to gluten but my body was young and healthy enough to just deal with it. Most likely it is a number of factors all working together.


Marked improvement in my condition after 30 days gluten free
At the end of the day, when I stop eating gluten in all forms, without any chance of cross contamination, I start to feel some relief in my throat after about 30 days. I have not yet had a resolution to this feeling of choking, but a reduction of about 65% to 75% after sustained abstinence from wheat is a HUGE improvement. It means the difference between me living on the precipice of total disaster, to being able to step back from the edge, and take a breath, literally. I can not explain to you why it works, just that it works. I am not saying you should do it too, but I would certainly research this subject further if you are unable to find relief, like me.


So wait - gluten is bad?
I am 100% not saying that gluten is bad. I don't know anything about gluten, except that I have read some stuff that makes me wonder if it is a problem or not. What I can tell you however, with a great degree of certainty, is that it is bad for me. At least for now. Potentially forever. But...I am stubborn. I tested and tested again the "theory" that perhaps the gluten is causing this. I would go months without, feel a little better, and then cave and have something to eat that contains wheat or gluten. Every time, without fail, 24 hours later the tight throat and choking returns, and every time it does I am reminded vividly about how horrid, and how horrible, that year I spent choking was.


Gluten does not make me sick...just sicker
I actually live in fear of the next time I know I get dosed with gluten. The thought of another month quelling the panic is almost too much to bear. Alas it makes it a LOT easier to avoid cravings for food with gluten in it. Being unable to breathe is a pretty good motivator...not to mention the dozens of other potentially serious side effects and complications that I experience. I never even get time to mention those because I am too busy addressing the most severe ones like my throat! I know, at least for now, that eating gluten makes me sick...or at least sicker. And not eating it provides some measure of relief from my most apparent symptoms. So this leads me to ask the obvious question about what else might I be eating that is causing me problems? This is how I found the autoimmune protocol.


What is the autoimmune protocol