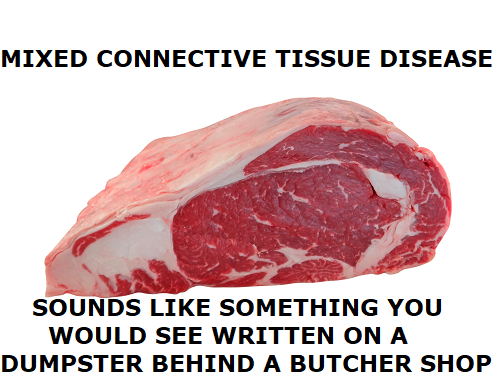 What is Mixed Connective Tissue Disease?
First, mixed connective tissue disease is an immune system disease that manifests as symptoms from multiple other immune diseases. The hallmark of MCTD is that it is different for everyone who has it. It makes it very difficult to diagnose, and often gets misdiagnosed, or diagnosed as a single autoimmune disease such as lupus, or undifferentiated connective tissue disease and then later the diagnosis changes as the disease progresses and starts to affect other parts of the body.


What part of the body does MCTD affect? In general, MCTD is an autoimmune disease which can attack the skin, eyes, brain, lungs, heart, kidneys, other organs, blood, bones, joints and connective tissues. There is no known cause and no cure except treatment of the symptoms as they come up. MCTD is not lethal in and of itself, but dying from any one of a number of potentially serious symptoms of the disease is a real concern. Statistically you have a 20% chance of dying from complications within 10 years after being diagnosed with MCTD. Certain manifestations of the disease tend to be more aggressive in this regard than others such as the 15% of people with MCTD that will go on to develop interstitial lung disease. This is the most lethal course for the disease with three to five years average lifespan following diagnosis being the most common. Many people diagnosed with MCTD will be lucky and their life will not be shortened by the disease, though management and monitoring throughout will be important.


Give it to me straight, Doc
What does all this mean in layman's terms? It means that for no damned reason at all my body will full on attack me like I am an invading virus. There is no rhyme or reason to the attacks, and they can be bothersome or embarrassing at the least, and life threatening at the worst. This is referred to as a "flare" which is a period of specific activity from the disease, where you are more under attack than normal. Life with MCTD is all about avoiding these flare ups to whatever extent is possible.


What causes MCTD to "flare up"?
So what can cause a flare up? Just about anything, and remember, everyone is different. Stress is, apparently, one of the biggest things to avoid at all costs. Some people even believe stress is a major, if not sole contributing factor to development of diseases like this. Since there is no known cause, this is only developing research and speculation. MCTD is only recently, and not by all doctors, considered to be a separate and unique disease, while others still feel it falls under the general umbrella of lupus.


The unique challenge of an invisible disease
Flare ups for MCTD can be caused by any number of environmental, physical or emotional reasons. This is part of the dastardly nature of this disease. It really is just the worst. As though there is a rule about MCTD that a symptom must be specifically embarrassing, painful or unbelievable in order to qualify. Truly the only thing worse than being sick 24/7 is when the people around you do not understand, or don't care, or simply don't believe you. I have complained about my back so much that people don't even hear me anymore. I get called out for avoiding social situations where I feel there is risk for me to get hurt. I get hurt so easily that I need to be very careful with what I do. I look like a big, strong, healthy man...what is your problem buddy? If you want to avoid the pity party skip the next page. It's not super fun.


Continue to the next page for the physical manifestation of MCTD

Skip to the following section on the progression of MCTD symptoms