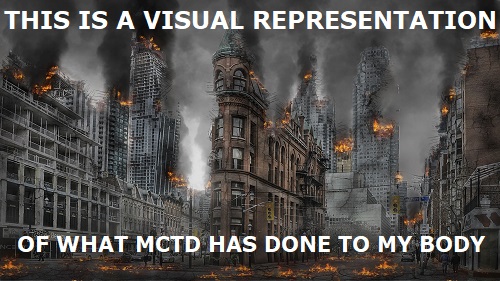 Again, I am not a doctor, and any doctor reading this can feel free to contact me so that I can make changes for technical accuracy, but ENA testing is not usually done unless ANA testing comes back positive first. ANA tests for autonuclear antibodies. ENA tests which ones (extractable nuclear antigens). My ANA was negative again, but I came back positive with the ENA test for antiribonuclear protein (AntiRNP) which is a very specific and unique blood marker found almost exclusively in people with MCTD. Some definitions state it is not possible for a healthy person to have a positive AntiRNP test.


Negative ANA, positive ENA
How can I be negative for these proteins with the ANA test, and then positive when you do the more extensive test to see which ANA I tested positive for (which I didn't)? I have heard answers ranging from "you can't", to "5% of all people with MCTD will have negative ANA and positive ENA". My rheumatologist must not have believed the test. She looked very skeptically at the negative ANA results, and positive ENA, and then repeated that test the dermatologist had requisitioned two more times. Every time, four times now total, negative ANA, positive ENA for Anti-RNP. Also now my rheumatoid factor which was hovering near maximum range for normal, tripped over and is outside the normal range on the latter tests.


What do these tests mean?
Explained in layman's terms to me, something caused my DNA to mutate. Either food, or environmental, chemical exposure, or stress, or a virus like mononucleosis, or even a bad sunburn or perhaps all of these things caused a mutation to happen. This mutated DNA, like from a virus maybe, bonded with my DNA. My immune system attacked it, like it is supposed to with foreign invaders, but in doing so noticed that the virus also looked a lot like me. Like my normal, healthy cells. Now confused, my immune system thinks that all my DNA is a foreign invader like the virus.


The immune system starts attacking everything
MCTD is like a confused immune system that keeps attacking the wrong things. At any point, or at all points, my body will attack any part of me that it is getting confused about. My immune system runs all the time, and it taxes me physically, and can be a real problem when I actually get sick from something and need my immune system to do the job it is supposed to be doing. It is also a problem since the immune system can cause serious, permanent and even fatal damage by attacking various parts of the body over and over. It can attack the brain, or heart, or kidneys, skin, eyes, joints, blood, bones, connective tissues and much more. There is no way to control what it attacks, or when it attacks it, except to determine what causes your flares and avoid that as much as possible. In the most serious cases immune suppressing drugs, and even a form of chemotherapy, can be employed to suppress or distract an immune system that is dangerously active.


Continue to the section on starting treatment for MCTD