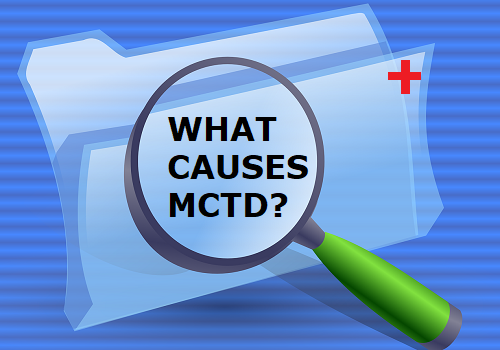 
MCTD is known as an overlap disease as it has symptoms overlapping from three main diseases; systemic lupus, scleroderma, and polymyositis. If you had only the symptoms of lupus then this would end up being your diagnosis. MCTD will involve some, but not necessarily all, symptoms from these different conditions, plus potentially also symptoms from rheumatoid arthritis and a high likelihood of symptoms of Raynaud's and Sjogren's.


Systemic lupus erythematosus - Systemic lupus is an autoimmune disorder where the body can attack healthy cells in the kidneys, liver, skin, joints, blood, lungs, heart and brain, and also commonly affects the gastrointestinal system as well. Other organs such as the pancreas can also be affected, and chronic fatigue, heart disease and anemia are also common.


Systemic scleroderma - Scleroderma is an autoimmune disorder that results in hardening of connective tissues like skin. In addition to causing problems with skin on the fingers, toes, and other spots on the body, scleroderma can also involve life threatening complications with the lungs, heart and kidneys.


Polymyositis - Polymyositis is an autoimmune disorder that involves inflammation of the muscles and connective tissues. Weakness of muscles close to your core such as hips, thighs, shoulders, neck and upper arms is the hallmark of polymyositis. Of significant concern with polymyositis is problems relating to swallowing and breathing due to the weakened muscles that control these functions.


Sjogren's syndrome - Sjogren's syndrome is an immune system disorder that is not required for a diagnosis of MCTD however it is common for people with MCTD to also have Sjogren's. The most common symptoms of Sjogren's relate to chronically dry eyes and other mucus membranes however joint and muscle pain is also reported.


Raynaud's phenomenon - Raynaud's phenomenon is a restriction of blood flow to the hands and feet due to spasming of the arteries in the extremities. The narrowing of the arteries and reduced blood flow commonly cause discoloration of the fingers and toes which can result from both environmental factors such as cold, as well as physical factors such as emotional stress. Up to 90% of people with MCTD will display symptoms of Raynaud's.


There is a lot of overlap in these diseases, along with MCTD and UCTD. UCTD (undifferentiated connective tissue disease) is when some symptoms of connective disease or overlap disease are present, but not enough or not definitive enough to warrant a full connective tissue disease diagnosis like MCTD. All of these confusing names and scary sounding problems all stem from the same basic process where the immune system attacks healthy cells. In specific an important takeaway here is the concept of inflammation. 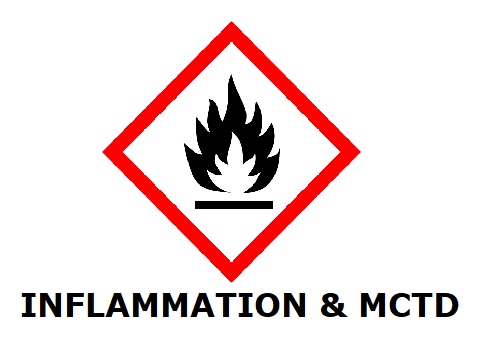 A very important issue was introduced in the above paragraph - inflammation. Inflammation is the actual physical thing that causes pain and damage within the body. Inflammation is something that everyone is vaguely familiar with however people with MCTD, or other immune system diseases, must become acutely aware and knowledgeable about inflammation. Specifically triggers for inflammation need to be discovered and minimized to whatever extent is possible.


Now that you understand more about how inflammation interacts with the body, you need to understand the mechanism which causes the inflammation. Inflammation is from the immune system attacking healthy cells. Immune system triggers vary from person to person but commonly include things like sunlight, stress, heat, cold, lack of sleep and certain foods / food sensitivities. Life with MCTD and other similar autoimmune diseases is about limiting known exposure risks that cause immune reaction, and ultimately, inflammation. It is also about managing the inflamed parts of your body as they become an issue to the best of your ability. In total this is about self awareness, discipline, smart choices with food, experimentation, and changing your life and lifestyle to be as healthy and low stress as possible - or else! 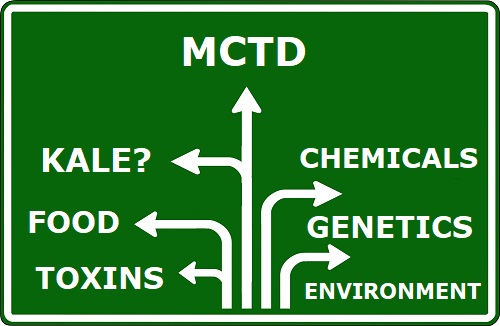 One of the first things you learn when you are exposed to connective tissue diseases and autoimmune disorders is that nothing is simple. You will never find a simple answer like you have X. X was caused by Y. This type of linear thinking has no place in the world of diseases like MCTD. Instead you will be presented with a series of possible contributing causes. Similarly you will not encounter a simple solution to problems stemming from MCTD. You have X. Take Y and you will be cured. This is why autoimmune disorders are considered complex diseases and are regarded as being caused by the interaction between epigenetic, genetic, and environmental factors.


Silica exposure - Silica exposure is suspected as being a contributing factor for development of some connective tissue diseases. Silicosis is the process where the lungs become inflamed after inhalation of crystalline silica. This inflammation can result in scarring of the lung tissue. This usually presents as a dry cough and asthma-like symptoms. Another term for silicosis is, interestingly, the longest word in the english language: "pneumonoultramicroscopicsilicovolcanoconiosis". A phenomena known as "accelerated silicosis" has been documented in people with extensive occupational exospore to crystalline silica. For more details you can read this additional information about the connection between silicosis and the development of connective tissue diseases.

While it is far from clear what causes mixed connective tissue disease, we do know enough to know that the answer will not be straight forward. All evidence so far supports MCTD developing as a result of a number of factors ranging from genetic to environmental. While MCTD was first defined as "Sharp's Syndrome" in the 1970's there is still little known about exactly how, or why, MCTD develops in some people.

If you start to research mixed connective tissue disease (or most other autoimmune diseases) you will discover that a lot of research points towards "leaky gut syndrome" being related. Leaky gut, just as it sounds like, indicates intestinal permeability. If the lining of your stomach or intestinal tract is too permeable then this could allow for foreign substances to make their way into the bloodstream. Mainstream medical science does not support leaky gut syndrome as a diagnosis however there is a clear connection between the digestive system and connective tissue diseases like MCTD.


In addition to gastrointestinal problems being very common in people with MCTD, there is also a connection between food and immune system activity. Most people are already familiar with how foods affect immune system activity which is why you might eat a lot of garlic when you are sick, or take Echinacea, or maybe enjoy a big bowl of chicken soup when you are under the weather. As indicated in my story about MCTD I was able to find some measure of relief from some symptoms of MCTD by eliminating certain foods from my diet. Further to this, adding in other specific foods to help fight inflammation is also something I can attest to, first hand, as being effective. While I can not justify leaky gut syndrome any more than the next person, I can definitively tell you that there is a connection between certain foods and how active my immune system disease symptoms are.


The most common food items that are suspected as being triggers for MCTD, and other immune system diseases, are mostly eliminated in one aggressive step with the autoimmune protocol. By eliminating all gluten, wheat, dairy, nuts, seeds, nut & seed spices, legumes, sugar, sugar replacements, nightshade vegetables, processed foods and chemical additives you can eliminate the majority of potential food triggers at once. While challenging, adopting a strict AIP diet for an extended period might help you to identify foods that are triggering an immune system response.