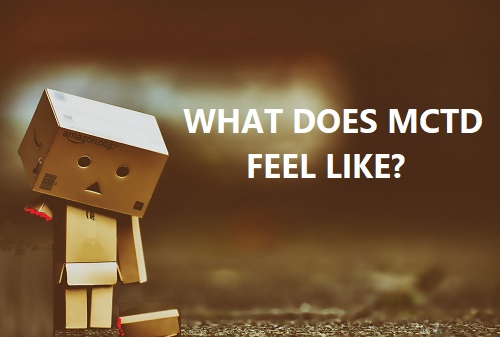 If you want to know what MCTD feels like then the first thing that you need to realize is that Mixed Connective Tissue Disease is something that manifests differently in each person that has it - both in what the MCTD affects, but also in how strong of an effect it has on the person. This is one of the reasons that it is so difficult to get MCTD diagnosed, and most diagnosis cases involve over 10 years of seeing doctors without finding answers before things start to make sense. As I discuss in my story about living with MCTD it took years for me to get a diagnosis and this was considered very fast by all accounts.


With that understanding that MCTD is different for everyone, and the understanding that my particular manifestation of MCTD is for the most part mild in nature, I am happy to share with you what MCTD feels like for me. I hope that this information helps care givers, friends and family of those with MCTD to understand better about the complex nature of this disease, and for people with MCTD also I hope that you are able to find some solace in the knowledge that you are not alone, and while my symptoms might be different than yours, we both know a world that most people could never imagine.


Energy - Some days I feel like I have enough energy to do anything but these seem to be few and far in between. Most days my energy level is low and it requires extra effort to encourage myself through the day to day tasks at hand. Some days my energy level feels like I have not slept in a week even if I have been getting enough rest at night there is just nothing in the tank. To describe this in more detail, after something that exerts or drains me physically or mentally there will usually be a few days, three or four, where my energy levels are completely depleted. On these days I am so tired that I could close my eyes and sleep anywhere, whether be standing, out in public or anywhere else...every moment of the day takes a huge internal push to keep my eyes open and lift one foot and put it in front of the other. On a day like this I could sleep for the whole night, get up for an hour, and then go back to bed for another four to six hours. I am not a person who likes to sleep all day. This, as I describe to most people, feels just like the flu where you are more or less relegated to being laying down in bed due to extreme exhaustion and a general "unwell" or malaise feeling.


Pain - The unwell feeling described above makes every joint in my body ache. The feeling is very similar to if you did a really heavy full body workout after not working out at all for a long time. The next day after a workout like that everything will hurt from your finger joints to your knees and hips, feet, calves and thigh muscles tight as a drum...combine with this the feeling of random severe shooting nerve pain, constant grating nerve pain, muscle spasms that can take days to relax, eye strain, migraines, internal pain in your chest, kidneys, blood and bones. If you have never had pain like I describe here then you are going to have a hard time really understanding and relating to this, but I bet you the people with MCTD are all nodding (painfully) along while they read this. In addition to these pains there are also random pain that comes on and debilitates for a day or two, and then leaves without a trace.


Endurance - The lack of endurance is one of the hardest parts of MCTD for me. Both a general lack of endurance, but also a specific lack of muscle endurance is something that I note on my off days. As an example of what I mean my arms become heavy and burn with fatigue while brushing my teeth in the morning. Usually I will need to trade out arms once or twice during the process as each arm reaches the end of its endurance. Once upon a time I was into long distance running so as you can see the difference between being able to run cross country to having to rest your arms while brushing your teeth is pretty big. Most days are not this bad, but on the bad days I will need to stop and "gather myself" with a few deep breaths when brushing my teeth.


Memory - What were we just talking about? Seriously though, forgetting what I am talking about in the middle of a sentence is one of the more common (and embarrassing) things that I need to deal with when I am out of my house. In signing a form I could not remember the day, month or even the year for a minute which was a little bit embarrassing to say the least. Most people do not understand what MCTD is or what it does, so I do not attempt to explain myself to people. I just accept that they look at me like I am some kind of idiot who does not even know what year it is, apparently.


Recovery time - When I experience anything specifically stressful or draining, or taxing on my system, I will usually need longer than a healthy person in order to recover. I typically note that it takes me two to three times longer than most people to recover from something. Like if I had dental work done and the dentist says that I will be sore for a day or two, that will usually be a week or so at minimum that I will be in discomfort. I also need extensive time to recover from things that aggravate my immune system response such as getting too much sun.


Illness - Hand in hand with recovery time is illness. Strangely I am able to avoid getting sick from other people quite often, and this has been described to me that my immune system is working all of the time, similar to how a healthy persons system would turn on when fighting off an invading illness...this is what my immune system does all the time. This means I can get lucky and avoid getting sick sometimes when there is a chance that I could catch something, but I find that when I do get sick it is usually fairly serious and lasts a very long time. A cold that might take someone out of action for a day or two could easily be a week or two for me to get past.


Anxiety & Depression - Anxiety and depression are both sited as symptoms of MCTD, and I definitely struggle with both of them. From my perspective however it seems normal to be depressed and anxious when you never know how your body will function from day to day, or when you will lose the ability to walk, or breathe easily, or even get out of bed. Wouldn't you be depressed if you had something like that, and you were told that there is absolutely no chance it will ever get better or go away? Perhaps the anxiety and depression would be there either way...I can not say for sure. But I can tell you that depression and anxiety are one of the biggest day to day difficulties with how MCTD makes me feel.


Fear - One of the greatest and most real struggles of living with MCTD for me is living with fear. I find I am always afraid now. Afraid that I might be in the sun too long and get sick, or that my rashes will get worse or spready to my face where I can't hide them. I fear doing too much today because of what tomorrow will feel like. I am worried my fingers will stop healing because they are constantly blistered and cracking from dishydrosis. I am worried my legs will just stop working again. I am afraid that my throat will close up for another year and nobody will be able to help it to feel better again. I am afraid of what getting old will feel like for me. I am afraid of not getting the chance to get old. I worry about how I will, or if I will, be able to support myself in the future. It is impossible to ignore the weight of realities such as this, and such is the burden of someone with MCTD. Even the days where I feel good I am only suppressing these wolves at the door...the reality of a disease with no cure.


I managed to live with these issues for many years before a diagnosis of my condition was made. It was easy to write off each of these problems as being unexplainable, or symptoms from some other thing or activity. Looking back with what I know now it is as plain as day to see that something was wrong. But it is hard to compare one persons reality to another persons. If my back hurt then I must have tweaked it yesterday, or slept wrong. When I was unexplainably exhausted then you just assume you must be "fighting something off" right now. I played this game for years before my body finally gave up fighting. Since I worked such a physically demanding construction job the constant inflammation of muscles and joints eroded cartrlidge and allowed artritis to start. I often lamented that I seemed to be in more pain and discomfort than my peers after physically demanding activities or a day out in the sun. As it turns out I probably was and I should have been listening more to my inner monologue back then. I WAS in more pain. That is why i am writing this part - listen to yourself and if you feel something is wrong then you are probably right and you should explore this further.


So what does mixed connective tissue disease feel like? It feels like pain, and hopelessness and being alone. MCTD feels like everything hurts and it will always be this way. You carry a faint memory of a person who had more zest and more life, but as the years go by the memory of this person fades and the reality of the situation grows harder to ignore. Some of the hardest parts of having MCTD is having friends and family who don't understand what it is like, and just want you to be the way that you used to be. Obviously I want that too, but I am able to feel what they can not, and to these people someone with MCTD looks just like that person that they used to know. I am a shadow of the person I once was and most likely that other person is never coming back. That is the reality of what MCTD feels like. It feels like resolution to a life that you never wanted - one filled with pain and struggle and seldom graced with true understanding from the people around us.


The Cook For Me Baby blog

Things you should never say to someone with MCTD