AIP On A Budget 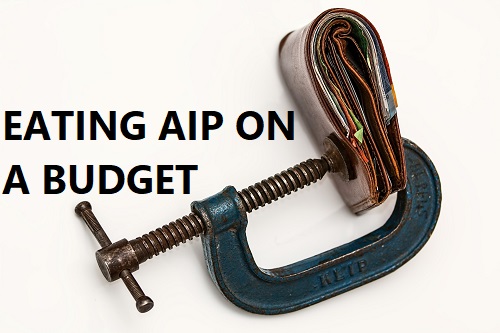 If you need to eat AIP on a budget then you certainly have your work cut out for you. Not that it can't be done...just that AIP has a lot of ways to be expensive and you will need to plan ahead for your meals to keep costs as low as possible. This is what happened to me when I started eating AIP at first. After almost ten years away from my "regular job" as I searched for answers for my declining health (which turned out to be MCTD) there was not a lot of extra budget for organic foods. Food is already expensive where I live and if you want to buy all organic foods then you are looking at easily three to five times as much money for both meats and vegetables.


Even just feeding one or two people on an AIP diet like I did costs a significant amount more than more traditional diets. If you have a large family to feed then your grocery bill might be the most expensive monthly bill that you have. Fortunately there is quite a lot you can do to help keep these costs under control and help you to ear strict AIP on a budget. It will however require that you adopt some level of ownership over your kitchen. If you already "own" your kitchen and have no problem with "from scratch" recipes, then this will still be a learning experience for most people, but nothing that should be too foreign to you. If you don't really cook, don't really like cooking, or just feel overwhelmed in the kitchen, then you need to put on your serious face and take on this challenge like it really matters. Because it really matters.


The first real secret to eating AIP for cheap, if you want to even call it that, is that you need to cook like people did 100 years ago. This was the very first change that I made in the kitchen to get my AIP budget as low as possible. 100 years ago they did not have tacos one night and turkey dinner the next. There was a very linear breakdown of food from big to little. 100 years ago you would start with something bigger, like a bone in roast, or leg of lamb, or rack of ribs and you would use that as the base for multiple meals. Much in the same way that you might make a large holiday feast and then use all of the leftovers to make something else for the following few days. Here is a perfect example of this with how I survived the holidays last year and made my own AIP turkey dinner and then proceeded to turn the leftovers into the single best AIP meal that I have had, bar none, with my AIP turkey leftover shepherd's pie. These leftovers were so good that we ate them for three days, and on the fourth day my wife asked me to make another shepherd's pie with turkey and cranberries. I never eat the same food that many days in a row, but after so long on the (fairly limiting) AIP diet this turkey leftover shepherd's pie was so filling and so satisfying. Can not recommend strongly enough that you try making one for yourself sometime. 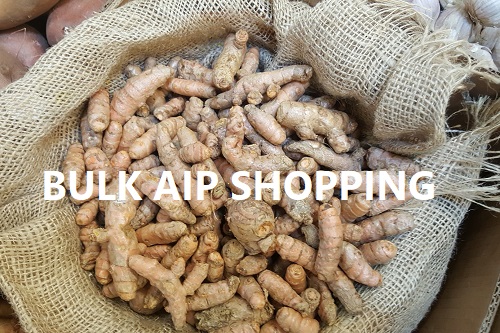 The first tenet of cheap AIP foods is that you need to buy in bulk and process things down into smaller portions yourself. Yes this is work, and that is great news since that means you are replacing dollars and cents with a little "elbow grease" as they say. Yes it will be hard for some people to get enough grocery money together to shop like this, but if you want to get your total costs down this is the first step you need to take. In specific I am talking about cuts of meat since this will be the backbone, no pun intended, of many AIP meals and recipes.


With so many restrictions on the food you can eat while AIP I can not imagine trying to do so without any meat. I am sure people have done it but from my perspective AIP is hard enough as it is, and the meat is basically the best part of this whole crazy diet! But then again I am (was) a big, hungry construction worker which is not typical for the "average" person with an autoimmune disease.


6 Tips For Eating AIP On A Budget:

1) Buy bulk and process down to smaller sizes

2) Eat many smaller meals throughout the day and abandon traditional meal times. Eat when you are hungry.

3) Eat as many salads as you can. Use fruit as a garnish in salads instead of by itself as a meal or snack.

4) Eat bone broth for as many meals and snacks throughout the day as you can stand.

5) Consider a regular fasting schedule, one day per week, or one meal per day. (if you believe fasting would be good for you)


We are all human and sometimes the confines of a strict AIP diet become too much for even the most determined people. If you are going to break your AIP diet, then instead of eating non-AIP foods, which can set you back literally months of progress being strict AIP, try breaking your diet within the confines of AIP. I would usually eat some extra fruit, or make a dessert like AIP apple crisp which while compliant does have too much (coconut) sugar. At least the nest day when I wake up I don't feel like I have wasted months worth of effort.


Organic meats - If you can afford to buy organic meat then you have it made in the shade on the AIP diet. Many people will struggle to afford exclusively organic and grass fed meats. Buying less popular meats, and lesser cuts of meat is how you start to find a way to buy only organic meats. Things like chicken and turkey are more affordable than beef. Further to this you can sometimes get a deal on dark meat legs and thighs because the food culture in north America puts a lot of value on white meat often leaving farmers with an abundance of the less popular cuts. If you do have money for red meats be sure to buy the fattiest cuts you can get. These have the most flavor and contain the most beneficial things like collagen, and normally you would avoid these fatty cuts with commercial meats as fat is where toxins and drugs accumulate, but with organic and grass fed meats the fat becomes the best part. Also consider looking at less common or less expensive meats than beef such as bison, lamb, pork, ostrich and wild caught fish.


Non-organic meats - Obviously you know by now that you are supposed to be getting organic meats when eating AIP but for some people and in some areas where food costs are high, this will simply not be an option. In the event that you must buy and eat meat that is not organic then you simply need to limit the amount that you eat as much as possible, substituting with the most vegetable dense diet that you can manage. When you do buy meat instead of buying fatty cuts, like a prime rib roast for example, you would instead choose a cut with the least amount of fat. The muscle holds less of the junk that commercial meat has pumped into it, and minimizing fat will help to minimize your risk in eating non-organic meats. Something like an eye of round roast with the fat cap trimmed would be a better choice than the fatty prime rib roast, and the eye of round will also have the benefit of costing WAY less than the prime rib. You just need to adapt your cooking habits to these new cuts of meat. A prime rib is delicious no matter how you cook it. Eye of round...not so much. You need to serve it rare to medium rare, or use it as a pot roast with something like a slow cooker stew that allows for many hours to allow the toughness of the meat to cook out and become tender.


When I start with something large like a prime rib roast, or an entire turkey, I plan to make a LOT of food from that one source. With prime rib I would probably serve it as a rare prime rib dinner one night, or even for two nights if there is enough. Then I will strip all of the meat from the bones and set that aside. The bones get saved and frozen until I have enough to make a giant pot of bone broth which is an absolute staple of an AIP diet.


Buying in season - Buying in bulk does not just apply to meats either. When you need to eat AIP on a budget you will need to identify some of the more expensive foods that you enjoy or eat regularly and then take advantage of seasonal shifts in availability and pricing. I would go broke if I needed to buy organic asparagus out of season where I live. Things like this you can minimize by buying in bulk when these items are in season locally and are at their lowest possible price / freshest possible condition. You can then use these items to prepare freezer meals, or you can process them and preserve them like with fermented vegetables. Or even just traditional jarring and canning when there is abundant local availability. Eating AIP on a budget does require planning ahead, meal preparation, bulk shopping, buying seasonally, and most of all working to prepare freezer meals and preserved fruits and vegetables for the months of the year when your required grocery items are at a premium.